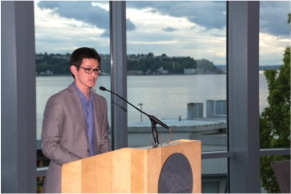 “2013 UFSC-Puget Sound Chapter and Western Regional Winner,” Devin Anderson joined the public speaking community in September of 2009 as a senior in high school. As the youngest member of the Waikiki Toastmasters club, he had the opportunity to give numerous speeches and observe distinguished Toastmasters fine tune their skills. He has been a master of ceremonies at a dinner hosting a thousand guests and has led the Seattle University Toastmasters Club as President for the 2012-2013 school year. Devin is a Seattle University undergraduate student majoring in Computer Science and also works in the schools IT Data Center. He aspires to be a network engineer and/or possibly an IT manager.